WARNING: This may potentially be triggering for those who were forced into marriage, particularly as a child bride. 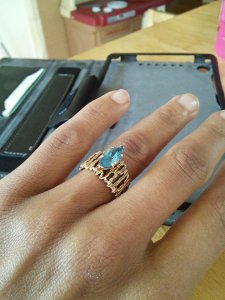 My Grandma Emma passed away recently. Above is a photo of one of her many rings she owned and the only one I will be keeping.

She was 87, living in Las Vegas for the last 40+ years. I appreciate that she was the result of really horrible circumstance that still made the birth of my dad possible. I acknowledge that like many Black poor women in Jim crow South, My grandma’s mother, Savannah, was so poor that she couldn’t afford a new pair of shoes. She agreed to have sexual relations with a white Scottish immigrant who simply could not show her mercy and give her the damn money she needed. Instead, he had to use her body the same way that chattel slavery deemed acceptable for women like Great Grandma Savannah. And out of the ‘exchange’, she became pregnant with Emma.

During the pregnancy, my father told me that his mother had told him that she had sat around depressed and sad all the time, staring at the moon at night as her belly grew bigger and bigger. When Emma came out, she ended up being ‘high yella’, but it wasn’t enough to still ‘pass’ and have a ‘better life as a white in Jim Crow Mississippi.’ But, she survived. Only having made it to the 3rd grade, she had to drop out of school, and then she was married off to my grandfather, who was 27 years old, at the age of 13. A child bride in the USA.

Grandma Emma told me how, during wedding night he of course wanted to consummate the marriage. When he took of his clothes, she ran around the room screaming because she didn’t know what that ‘thing’ was below his pants. She said she was still playing with dolls when she married him. I appreciate what she did to survive, despite the many things she had done or said out of ignorance, such as commenting that she didnt know why I had to marry a white boy when she found out I was engaged to my now husband, Oliver, a white man from Germany. But, after a year, I forgave her and realized that she must have a lot of deep hate towards ‘whiteness’ because of the pain of which she came about and her life in Mississippi, to have said something like that and not realize how it could have hurt me…and how I didn’t realize that that was where her comment had come from until a year later.

So yes, I appreciate her, her dedication to my twin and I from afar, always sending us gifts even though she was poor as hell. She embodied love and committment to our family, and I wish I could have been less rigid and more accepting of her views and developed a better relationship with her. I named the protagonist Savannah, in my new book Scars: A Black Lesbian Experience in Rural White New England because of similar circumstance of which Savannah was born out of.  I’ll be talking more about this in May 2015 in Oregon. In the book, inspired by the lives of Black women in both my mother and father’s families, Scars gives the reader narrative of suffering and narrative of hope to heal, acknowledging the #BlackWomensLivesMatter.

(Apologies for typos. My computer is broken. Lots of pink lines makes it hard for me to see if there are spelling mistakes)

Like what you read? Have you already read Sistah Vegan or Scars and enjoyed it? Please see how you can help me with my next exciting book project.

0 thoughts on “A Child Bride in Jim Crow Mississippi: Scars of Suffering and the Promise of Healing”