A few months ago, I let my fans know that for a future Sistah Vegan endeavor, I will be collaborating with artists and designers to make a new line of Sistah Vegan “approved” jewelry called “Fashionable Resistance”. This line will showcase the activists and scholars who have been influential for my scholarship and activism. Back in the Fall of 2014, I had written that I would love to showcase folk such as pattrice jones, Angela Davis, Bryant Terry, DJ Cavem,  Lauren Ornelas (Food Empowerment Project), Octavia Butler (vegan by the way) and Queen Afua (with proper permission from them of course). 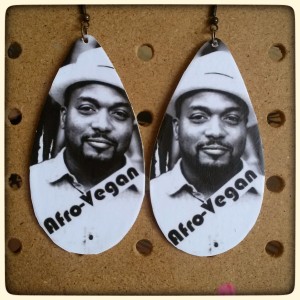 The kick-off event has now arrived for the Sistah Vegan Project’s Fashionable Resistance. Chef Bryant Terry is the first person to be part of our new line and I couldn’t be more thrilled. Charisma Eclectic helped with the design and making the earrings. Author of groundbreaking vegan cookbooks such as Vegan Soul Kitchen, The Inspired Vegan, and Afro-Vegan, Terry’s work has been a significant influence on the Sistah Vegan Project’s ‘race-conscious’ approach to analyzing vegan praxis in the USA. I attended his 2009 book release party at San Francisco’s Museum of the African Diaspora. He gave a thought-provoking speech in which he spoke about his journey to producing his first solo book project. While giving the talk, the projector was stuck on showing the image of a watermelon on the wall. Terry began talking about how ‘perfect’ it was that the projector was stuck on showing the watermelon. He shared with us that he had never had a taste of watermelon until he was a teenager. Why? Because of the negative stereotypes of Black people eating watermelons, his parents wanted to protect him from the pain of living in a racist and anti-Black USA society as a Black male. Food objects such as watermelon that should be pleasurable, became a taboo to consume because of its laden socio-historical connotation with Blacks as ‘buffoons’ within the white racist imagination/narrative.  Terry’s story helped to strenghten the Sistah Vegan Project’s theory that how individuals experience ‘cruelty-free’ vegan food objects (such as watermelons)  is deeply impacted by the on-going cruelty of systemic racism.

6 years later, Terry’s work continues to engage both vegan culinary arts and critical race consciousness around the needs of communities of color, such as fighting environmental racism and acknowledging that we live in a militarized police state in which racial profiling and anti-Black ideologies rule supreme.

I was selling them 4 years ago, but was not able to find someone to create them. I am hoping to start that up again and have proceeds go to the social/food justice cause of each activist’s choosing.

0 thoughts on “Fashionable Resistance: Afro-Vegan Bryant Terry on Your Ears”